Pokemon Mystery Dungeon Explorers of Sky – One of the Best Pokemon Spinoffs!

Over the course of the summer, I decided to go and see the Detective Pikachu movie (didn’t really have anything else to do at the time). It was pretty good, good enough in fact to get me to try Pokemon Emerald since I had heard good things about it.  That’s why I’ve been playing various Pokemon games all summer. Funnily enough, I haven’t actually beaten one yet, every time I get pretty far into one I either find a different Pokemon game to try or I’m unhappy with a choice I made that I can’t change or would take a long time to change. After trying a few I decided I wanted to play something a bit different. I searched on a few rom sites for a while and I stumbled across a game called Pokemon Mystery Dungeon. I played it for a bit and… I actually didn’t like it all that much. The controls were really uncomfortable to me. It was only a few days later that I decided to give it another shot. I got better with the controls I got further in the game. Surprisingly, it was starting to be really fun! And that’s why I’m here making this article.

I would describe the game as a bit of a cross between Pokemon and Crypt of The Necrodancer. You go through randomly generated dungeons and fight other Pokemon with a bit more of a real time battle system. It might seem too simple at first but it gets really hard and fun later on. The game’s main gimmick (other than randomly generated levels) is you being a Pokemon yourself! I really love this idea because in the main series games, you’re stuck as playing as a Pokemon Trainer. It’s especially fun when you can play as your favorite Pokemon! Unfortunately that leads us to one of the things I don’t like all that much in this game.

When you start the game, you’re given a test to see what starting Pokemon would best suit you. It’s really useful if you don’t really know who you want to play as but if you want to play as a specific Pokemon then it’s a complete nightmare. Each answer of each question awards you points depending on the different natures. Each Pokemon has a specific nature that they are so whichever of the points is highest determines what Pokemon you’ll get. It’s very confusing to get a specific one, even with a chart showing which answers award different points. Luckily they changed it so that in the 3DS Mystery Dungeon games, if you don’t like the Pokemon that was assigned to you, then you could choose a different one yourself. But anyway, once you’ve done that quiz you also get to pick a partner that will travel along with you. Sadly you don’t get shrink ray’d by a professor once you’ve made your character. The game starts with you meeting the partner you picked after you fall off a boat and into the water like a little sissy. You also learn that your partner has a stone he likes. I guess different people have different things they enjoy. You’re also introduced to basically the bad guys of the game, Zubat and Koffing. The developers did their darn best to make you absolutely hate these two, I’m not joking. They’re constantly getting in the way of things and being annoying. But anyway they steal your partner’s- alright I need a name I need to call the partner you picked or this will get super annoying. I’ll call him Pat after the first 3 letters of a certain word that describes him perfectly. But anyway Koffing and Zubat steal Pat’s pebble so you’re forced to help Pat get it back in a bit of a tutorial to how the levels of this game work. You go into a Mystery Dungeon and find the exit of each floor which can be anywhere in the level and make your way to the destination while fighting other Pokemon and managing resources. It seems simple but it’s very fun, which is what the main series is like, it may seem pretty simple at first but it’s actually very complicated when you are trying to make your Pokemon as strong as possible. 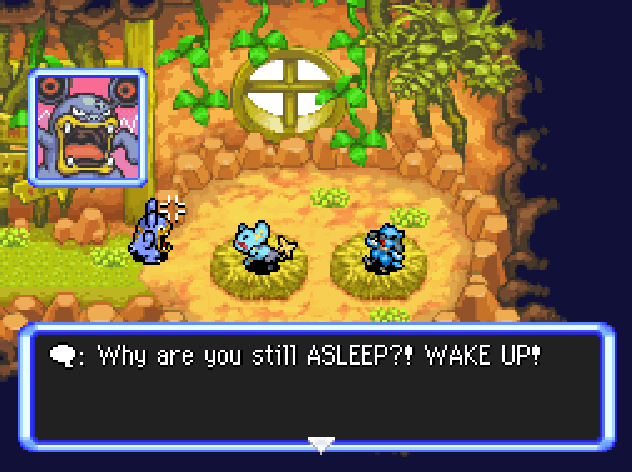 After getting back Pat’s pet rock he tells you about exploration teams and what they do. Basically an exploration team is a team of two or more Pokemon that do missions for other Pokemon or arrest outlaw Pokemon. This is where the game really shines. Missions are usually really short and simple so it’s perfect for a handheld game. And being able to pick and choose what missions to do is tons of fun, it kinda feels like a Mega Man game in that you can choose which stages to do in what order. There’s also a handful of scripted missions which usually unlock new areas and advance the plot. All of this, combined with you being able to actually recruit new Pokemon on your team adds TONS of replay value.

In conclusion, I hope this article gives you some information about this amazing game. I would keep going with the story but a huge chunk out of the enjoyment of the game will be gone if you already know the story. I hope this convinces you to try Pokemon Mystery Dungeon.